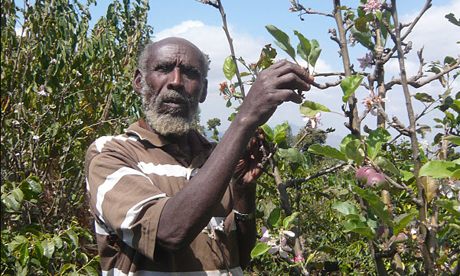 ‘growing out of food aid’

Located in the Horn of Africa, Ethiopia is known for its beautiful language, people, and apples. Dadi Yadete, a weather-worn 72-year-old man took a gamble three years ago when he started growing apples. Initially hesitant and doubtful, he planted 12 trees, but the experiment has paid off wonderfully. Located 2,300 metres above sea level, the Ethiopian highlands in Dire Dawa enjoy a temperate climate where apples can thrive.

Yadete, now has 70 flourishing apple trees on his small plot of land – about 0.5 hectares – where he also has a large avocado tree. He now grows barley, a few coffee bushes, sweet potato, green pepper and bright red hot chillies. “Life was very difficult when I was trying to grow maize and barley,” said Yadete. “I was producing nothing and I was receiving food aid, now I don’t need food aid.” Yadete now gets about $600 a year from the sale of his apples, and he owns four cows and two oxen, which makes him a relatively wealthy man.

Life in Ethiopia is on the up as the country is devoting 17% of its budget to farming, well above the 10% commitment agreed by African governments. Ethiopia also hopes to reach middle-income status by 2025! We’ll crunch to that!