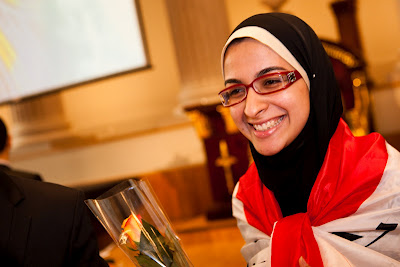 Egyptian teenagers seem to be on a roll. First it was space propulsion systems, now its biofuels. A sixteen-year-old Egyptian student, Azza Abdel Hamid Faiad from the Zahran Language School in Alexandria has identified a new low-cost catalyst which can generate biofuel by breaking down plastic waste.

The idea of breaking down plastic polymers into fuel feedstocks, the bulk raw material used for producing biofuel , is not a new idea. But Faiad has found a high yield catalyst, aluminosilicate catalyst, that breaks down plastic waste producing gaseous products like methane, propane and ethane, which are then converted into ethanol to use as biofuel.

Faiad and her mentors propose using this discovery to exploit Egypt’s high plastic consumption, which is estimated to amount to one million tons per year, and make money from recycled plastic! She calculates that this technology “can provide an economically efficient method for production of hydrocarbon fuel namely: cracked naphtha of about 40,000 tons per year and hydrocarbon gases of about 138,000 tons per year equivalent to $78 million.”

As we know plastic waste is a huge problem in the Middle East and for our oceans, but hopefully this idea will help convert the problem into a real sustainable solution.