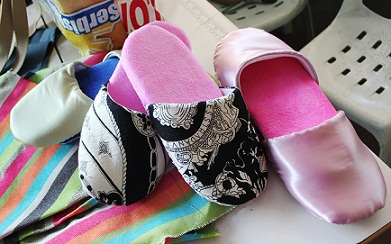 The disposable bedroom slippers of a five-star hotel in Manila may be going straight to the black garbage bag after being worn by guests, but they are not headed for the dumpsite just yet. Detainees who comprise the Makati City Jail Integrated Green Producers Cooperative (MIGCO) are helping the environment in their own creative way by turning such waste materials into fashionable and reusable items.

The thin, white slippers, which bear the embossed letter “S” logo of the Edsa Shangri-La Hotel, are re-fashioned by these green-minded inmates into colorful bedroom slippers that they sell for P30. MIGCO, which claims to be Asia’s first green cooperative for inmates, was jointly organized in 2011 by the Bureau of Jail Management and Penology (BJMP), the Makati City government, the Makati Chamber of Commerce (MCC), and the Rotary Club of Makati EDSA.

While the use of recycled materials in jail-based livelihood programs is not new—with prisoners from other jails known to weave baskets or make pen holders from rolled up sheets of an old telephone directory—what makes MIGCO different is the amount of support it has been getting from its partners. MIGCO’s membership has grown from 42 inmates since its launch in August 2011 to around 100 as of April 2012. According to Espinocilla, the members’ skills have improved in such a short span of time that they are now able to turn whatever size of scrap cloth they have into a usable item. The inmates automatically get half of the income from the sale of the finished product, while the remaining 50 percent is split between MIGCO and the BJMP (30 percent goes to the cooperative’s capital while 20 percent goes to the educational and rehabilitative programs organized by the BJMP’s Inmates’ Welfare Division).