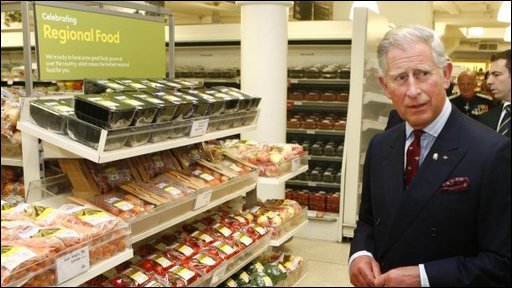 The Prince of Wales described those producing food as nature intended it as ‘real heroes or heroines’ at the BBC Radio 4 Food and Farming Awards in London. He said they are “creating food that has a story to tell; a story with a golden thread that directly connects the miracle of Nature’s richness with our own need for sustenance”. He said, “These stories are all different – that is an important part of their appeal – but they often talk about a sense of place, about rare and native breeds of animal, or of fruit and vegetables; about timeless production methods and about unique presentation. But, above all, the essence of these stories is that at the end of the day they are actually about agri-culture, not about agri-industry”.

The Prince then went on to make a devastating critique of the industrialisation Britain’s food industry.

“if organically, or sustainably, produced food has no health benefits, then why are the water companies in this country spending something like £100 million pounds a year removing the pesticides and other chemicals from our water supply?”

“If our approach to industrially produced food (of which, incidentally, we waste some £10 billion worth in this country) is so sensible, then why are we seeing a dramatic increase in Type-2 Diabetes across the developed world?”

“If an industrialized approach to animal husbandry – which increasingly treats animals as machines in an ever more “efficient” system – carries no risk, then why are we seeing e-coli outbreaks in the United States from cattle raised on feedlots, fed on corn (when their stomachs were designed to cope with grass and leaves) and processed in ever-decreasing numbers of abattoirs as big as car factories?”

“If every technological innovation to increase the productive capacity of industrialized animals far beyond what Nature intended is considered safe, then why did the European Union decide to ban antibiotics as growth promoters in animal feed after they had been in use for fifty years?”

“And if, all the evidence shows that when children or, indeed, prisoners are fed proper, nutritious food, their behaviour and concentration both improve, why do we then ignore it or dismiss it as irrelevant?”

He praised the social entrepreneurs who are celebrating smaller scale, local and sustainable food production and said that if we lose the knowledge and traditions of our food culture, and fail to give back to Nature what we take from it, “we will lose the wherewithal to look after ourselves and our planet”.