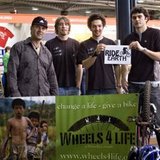 Tom Allen talks to i-genius about the ultimate quest – a 3 year journey around the world with nothing more than a bike! Here he explains his inspiration, fears, and how he is uniting his passion for cycling and the environment with his desire to give something back…

Editor:What has inspired you to undertake such an ambitious venture?

Tom: I think my main inspiration comes from my desire to learn, which has been with me for as long as I can remember. The world today is a complex and gigantic entity, and one of the best ways to learn about it is through one’s own eyes. Cycling will allow me to connect with the landscape, people and cultures that you travel through in a way unlike any other mode of transport – walking offers the same benefits, but the distance you can cover on a bicycle is far greater. It also happens to be an activity that I inherited from my parents and have pursued for many years, both on- and off-road.

Myself and Andy Welch are planning to leave at the start of National Bike Week on the 18th of June this year, from our own homes in Northamptonshire. We’ll make tracks towards Harwich, cross to Holland on the ferry, and make our way through Europe and towards the Middle East for winter. After that, we have some options regarding route, but the climate and seasons will dictate our movements to a large extent. Crossing Asia and island-hopping down to Australia will be the main objective, followed by a sea voyage to South America, and then the entire length of the American continents, before returning back to the UK. I expect to be away for at least 3 years, if not for longer.

Editor: What has made you passionate about the environment, and about educating others about how to look after the world in which they live?

Tom: For me, growing up in the countryside had a huge amount to do with this, but I also believe that humans have a moral obligation as a species to look after the planet they inhabit. We constitute a miniscule blip in the history of Earth and, as with life, if we get it wrong there won’t be a second chance!

I believe people need to fully grasp and accept the potential consequences of what we are doing to the planet, rather than take the easy option of ignoring them, and leading by example is, I think, a good way to do this. It’s already beginning to happen. Hopefully the project will add to the growing inertia, and educate and enlighten people in this way – even if it’s only a small handful, it’s still the result I’m looking for.

Editor: Have you ever done anything similar to this? Are you nervous?

In a bit more detail – the longest self-sufficient bike trip I’ve ever done was a week’s off-roading through the Scottish Highlands with 2 friends. It inspired me to do what I’m doing now, and taught me a lot about how not to do it! I guess the nerves will kick in when I actually pedal out of the drive and down the road – it’s too big a concept to really grasp at the moment, while my mind is occupied by planning, publicity, sponsorship applications and a million other things!

Editor: How much money do you hope to raise? Which charities will the money go to?

Tom: We’ve set a target of Ã‚Â£10,000 for fund-raising, which will go to The Wilderness Foundation for their ongoing work in the UK and overseas. The other charity that will benefit from the project is Wheels4Life. This was set up by mountain-biking legend and former World Champion Trials rider Hans Rey. We will be acting as ambassadors for the charity, buying bikes locally and donating them to developing communities where there is a real need for a sustainable means of transport. This will an amazing opportunity to watch the benefits of cycling being discovered in front of our own eyes and to see it make a real difference to the lives of the people of those communities.

Editor: What does the term ‘social entrepreneur’ mean to you?

Tom: I guess it carries a lot of meanings, but those that spring to mind are a certain degree of idealism, and from that the optimism and determination to move things towards those ideals. The success of social entrepreneurism shows that these are still achievable concepts in a money-dominated environment, which is certainly encouraging for people like me!