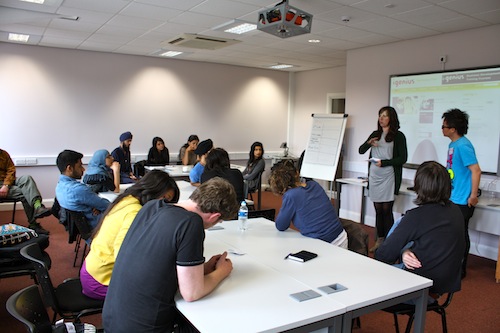 Last weekend i-genius hosted a highly creative, educational, and practical workshop at the School for Changemakers (SfCM) 2011 in Liverpool (Hope university). The workshop was a combination of training on how to start up a business with the opportunity to work in a team to develop ideas that solve important social or environmental problems. Imagine Dragon’s Den meets the Apprentice with an i-genius touch.

Participants worked in teams and were given the task of developing a sustainable business idea. There were four teams in total: 2nd Life, Cybernated Farm Systems (CFS), Fairshare, and Blue Gold. Passion ebbed and flowed as the teams were in direct and often at times hot competition with each other over the course of the two days. The points were so close that in the end both Blue Gold and 2nd Life won the competition, leaving CFS and Fairshare (who declared themselves the outright ‘moral winners’) losing by only one and two points respectively. The prize was a free invitation to i-genius’ 2nd World Summit to be held in London the week before the 2012 Olympics. The losing teams were fired!

Apart from the workshops there were opportunities to listen to lectures (of which i-genius’ Tommy Hutchinson spoke), join community groups to share experiences and inspire change in one another, as well as entertainment nights, recreational activities and morning quiet time – allowing for a moment of collective peaceful energy exploration.

It was a lovely weekend and the i-genius team very much look forward to hosting another exciting workshop next year at SfCM 2012 where there will be plenty more humour, innovation, and learning.