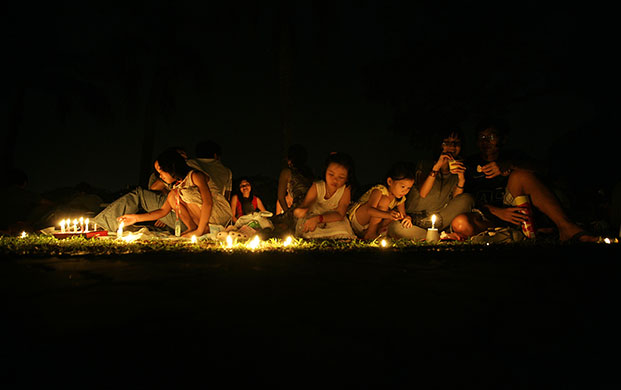 the world turns its lights out

Earth Hour 2010 took place on Saturday 27 March at 8.30pm (local time) and was a global call to action to every individual, every business and every community throughout the world. It was and is a annual call to stand up, to take responsibility, to get involved and lead the way towards a sustainable future. Iconic buildings and landmarks from Europe to Asia to the Americas stood in darkness. People across the world from all walks of life turned off their lights and joined together in celebration and contemplation of the one thing we all have in common – our planet.

Earth Hour started in 2007 in Sydney, Australia when 2.2 million homes and businesses turned their lights off for one hour to make their stand against climate change. Only a year later and Earth Hour had become a global sustainability movement with more than 50 million people across 35 countries participating. Global landmarks such as the, Sydney Harbour Bridge, The CN Tower in Toronto, The Golden Gate Bridge in San Francisco, and Rome’s Colosseum, all stood in darkness, as symbols of hope for a cause that grows more urgent by the hour.

In March 2009, hundreds of millions of people took part in the third Earth Hour. Over 4000 cities in 88 countries officially switched off to pledge their support for the planet, making Earth Hour 2009 the world’s largest global climate change initiative.