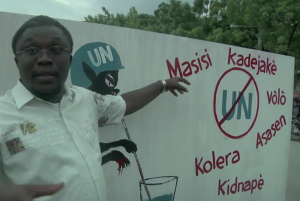 providing a space for masisi people

The 2010 earthquake in Haiti not only brought international attention, but also a tremor of sustained criticism in the way outside interventions have operated in the most destitute country in the Western hemisphere. However, one start-up organization, KOURAJ, is trying to break from the pattern, pioneering an innovative approach to development that functions in a bottom-up, self-sustaining manner, through the creation of a social enterprise that will ultimately provide financial autonomy.

KOURAJ consists of a group of activists and leaders in Haiti’s Lesbian, Gay, Bisexual, and Transgender (LGBT) community who are focused on empowering themselves by overturning common conceptions of LGBT people as marginalized, vulnerable, and infected persons. Their first project, for which they have just finished crowdfunding on Kickstarter, is a bar/cultural center that will be provide a space for Haitian artists to share their talents, while providing a space where Haitian ‘masisi,’ as LGBT are referred to, feel comfortable. An American named Nick Stratton, who helped create KOURAJ, explained that “the project is not only urgently needed in Haiti, but also an exciting model for grassroots, sustainable, community-based development”.

To learn more about this project visit their website (in French): http://kouraj.org/