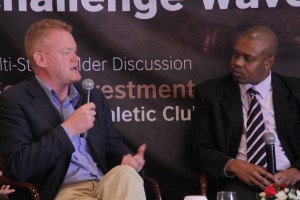 “The spirit of entrepreneurship will be absolutely crucial to the future of Indonesia.”

In November 2009, a new frontier was established in the field of social entrepreneurship in Indonesia. It was the fruit of two organizations: the British Council Indonesia, whose work includes the promotion of a knowledge economy through community development and support for creative champions; and the Arthur Guinness Fund (AGF), a global initiative to further the legacy of Arthur Guinness widely regarded as one of the first social entrepreneurs.

Under the banner of the Arthur Guinness Fund – British Council Community Entrepreneurs Challenge (AGF-BC CEC), a programme was engineered to help aspiring community-based Indonesian social entrepreneurs achieve their dreams, and develop their projects in line with the principles of both the AGF and British Council.

In 2010, the first wave of this challenge allocated up to Rp 600 million to develop six projects judged to have the most potential in terms of social, economic and environmental benefits.

After a successful first wave, the AGF-BC CEC Wave II was launched on 1 March 2011 to identify and support a second group of potential community entrepreneurs.

The Launch was held at the Mercantile Athletic Club, Central Jakarta and was attended by stakeholders from various sectors, all of whom has an interest and a voice in supporting the social entrepreneurship movement in Indonesia. The event was opened by Keith Davies, OBE, Country Director of British Council Indonesia who shared the great impact social entrepreneurship had on the UK economy and how the movement have grown stronger globally despite recent recessions.

To support the launch of AGF-BC CEC Wave II, stakeholders engaged in an active discussion on social entrepreneurship as an alternative model for social investment. The discussion was moderated by career coach and social entrepreneurs’ aficionado, Rene Canoneo. Attending the discussion as resource speakers were Tommy Hutchinson from i-Genius, Maria R. Nindita from The Centre for Entrepreneurship, Change and Third Sector Universitas Trisakti, along with Fred Otieno and Ipung Nimpuno as representatives of Guinness.

If you are interested in the presentations used by Tommy Hutchinson and Maria R. Nindita during the discussion, please download the links below:

Photos of the event can be found at flickr

If you are interested to participate in the AGF-BC CEC Wave II, application process will open on 21 March 2011 – 1 May 2011. Next week, they will be uploading more information on how to participate onto their website, so stay tuned!