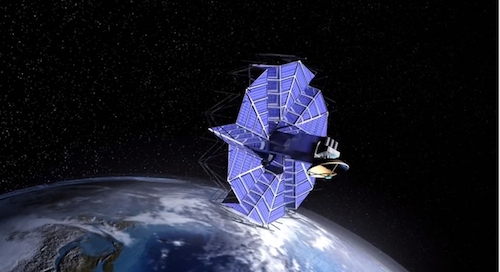 expandable nets in space and here on Earth

A team of researchers at BYU have teamed up with an origami expert to create a solar array that can be folded down to one-tenth its size for launch and then unfurled once in space. In partnership with NASA’s Jet Propulsion laboratory, the project has found a way for large solar arrays to be compactly sent into space as power sources for space stations and satellites.

“It’s expensive and difficult to get things into space; you’re very constrained in space,” said BYU professor and research team leader Larry Howell. “With origami you can make it compact for launch and then as you get into space it can deploy and be large.”

The solar array the team developed can be folded tightly down to a diameter of 2.7 meters and then unfolded to a full size of 25 meters across. The team has a goal of making an array that can produce 250 kilowatts of power, which is pretty ambitious. The International Space Station currently has eight solar arrays that generate 84 kilowatts of energy.

Beyond solar arrays, the group thinks origami could also be used for antennas, solar sails and expandable nets in space and here on Earth, origami applications could include medical implants, compact cell phones and deploy-able housing for emergency use.

And how about floating origami solar panels to generate energy for homes across the globe? A challenge to tech-social entrepreneurs out there!