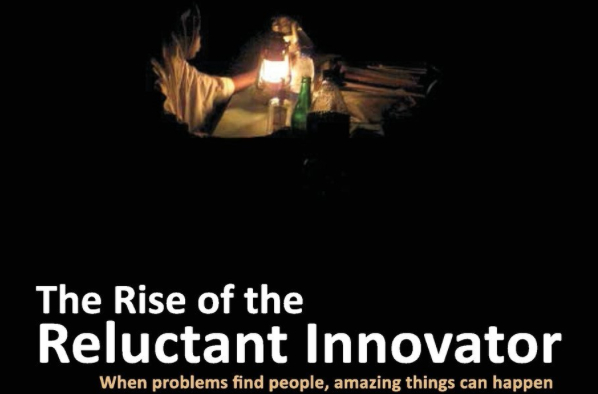 Despite the tens of billions spent each year in international aid, some of the most promising and exciting social innovations and businesses have come about by chance. Many of the people behind them didn’t consciously set out to solve anything, but they did. Welcome to the world of the ”reluctant innovator”. The Rise of the Reluctant Innovator fills a much-needed gap in the social innovation/social entrepreneurship market. The book highlights the personal stories of ten social innovators from around the world. Ten ordinary people who randomly stumbled across problems, injustices and wrongs and, armed with little more than determination and belief, decided not to turn their back but to dedicate their lives to solving them.

People like Laura Stachel. After watching local doctors and midwives struggle to treat critically ill pregnant women in near-total darkness on a Nigerian maternity ward, where an untimely power cut can mean the difference between life and death, Laura develops a solar-based solution that greatly enhances survival prospects. Or Josh Nesbit, who, intending to ground himself in the realities of global health during his internship in rural Malawi, discovers that it is hard to sit on the side lines and soon finds himself proposing an innovative mobile technology solution to overcome the difficulty of connecting patients, community health workers and hospitals.

“A book of hope, inspiration and a beacon of what is possible”, from the Foreword by Archbishop Desmond Tutu

This inspiring book, which has received glowing endorsements from experts around the world, is a must-read for innovators, entrepreneurs and anyone interested in the sharp end of development work – be they students, practitioners or policy-makers.

Some sample sections from the book can be downloaded (PDF) here.