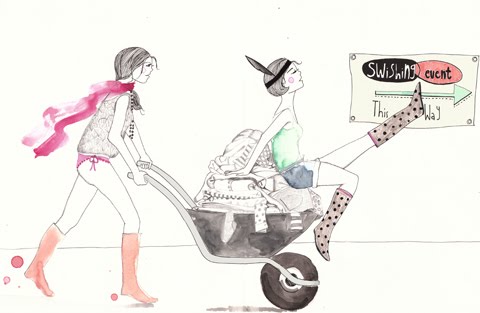 Global Swishing week comes to an end today, but that doesn’t mean you can’t catch the swishing vibe. There is no doubt that we all love fabulous new clothes but not the unfortunate side effects it has on our bank accounts, and some bosses don’t understand the importance of shiny new shoes, and buying heaps of new stuff is pretty terrible for the planet. So, what’s a girl to do?

Swishing is shopping without these hangovers. Participants bring nice, clean, presentable clothes that are lurking unloved in their wardrobes, and other girls fall in love with them and give them a good home. You might bring one sweater and take two pairs of shoes, or hang a party frock on the ‘Swishing Rail’ and take a pair of skinny jeans and feather boa.

Clothes swapping parties have spread worldwide since they were first given “a glam facelift” and a brand six years ago by Lucy Shea, CEO of Futerra, who christened the swaps “swishing” – the noise of rustling clothes from your friends – and set up a website to help people put the parties on. In the past few weeks she has had requests for swishing party advice packs from women in Buenos Aires, Mexico City, Sydney and Paris. In the UK alone she estimates that 7,000 women swap 25,000 items every year.

Every year in the UK we buy around 2 million tonnes of clothes, and throw away 1 million tonnes , all of which comes with a colossal footprint of embedded energy, water and toxins. The average woman owns 22 items she’s never worn. Swishing is designed to cut this waste by giving women “the thrill of retail therapy without the environmental side effects,” says Shea, and by “making swapping clothes an aspiration, rather than a shabby secret”. According to Futerra, 0.4 kg of CO2 is saved for every item of clothing that is re-used rather than bought new. That’s worth swishing for if you ask us!