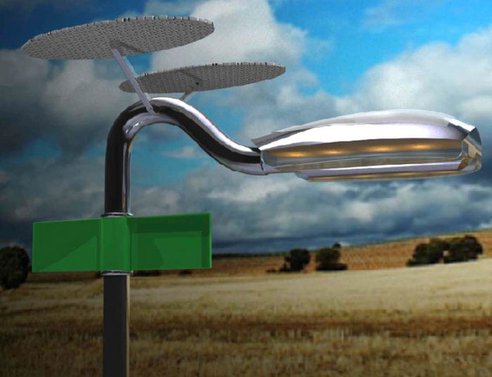 Streetlights are an important safety measure in towns and cities, but they since they burn all night long, they often make up a large chunk of a city’s power demand. Solar-powered streetlamps seem like a wonderful solution — solar panels on the lamp posts harness solar energy during the day that is stored and used to power the lamps at night. But cloudy days keep the lamps from being able to operate on renewable energy alone.

That’s where University of Seville’s wind- and solar-powered Holonic Streetlamp comes in. The design features both two top-mounted solar panels and a vertical-axis wind turbine to provide power for the lamp, letting it run on renewable energy alone and both on and off the grid. The power generated is stored in two 12-volt lead gel batteries contained in the base of the lamp post, though lithium-ion batteries could also by used.

The lamp features a photocell that detects when it’s getting dark out, which turns on the array of LED bulbs to illuminate the street. The brightness of the bulbs can be adjusted and the lamps can also be put on a set schedule. The lamps can be connected to the grid and remotely monitored and operated by a telemanagement system, but they also have the ability to run free of the grid, which would be especially useful during grid power outages.

The bulbs have a lifespan of at least 50,000 hours and the whole system can sustain winds up to 87 mph and operate in temperatures up to 104ºF. When the streetlights have reached the end of their useful life, 95 percent of the set-up can be recycled.

Hopefully it won’t be too long until we see these streetlamps in action. The university is working on a prototype of the streetlamp and looking for buyers for its technology.